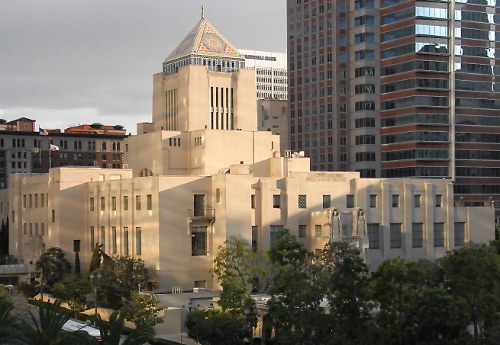 If you are the bookish type who appreciates fine architecture and who prefers to spend your free time exploring quiet, intellectual places, then the Los Angeles Public Library might be just the place for you to visit when in Los Angeles. And it less than 2 miles from the Los Angeles Convention Center.

The Central Library is an early example of Art Deco, the transitional modernist style popular from the mid 1920s through the 1930s. Its monumental simplicity serves as a backdrop for an ambitious program of decorative sculpture. Bertram Goodhue agreed with the traditional assumption that referencing history and culture through art adds a valuable intellectual dimension to public buildings. Thoroughly integrated into the base of the tower and three facades, groupings of high and low relief sculpture impart a unique character to the Goodhue Building’s exterior. It is a distinctive combination of a building strikingly modern in style, yet traditional in the way it uses art to symbolize and celebrate its cultural function. In particular, The Tom Bradley Wing contains a number of art projects commissioned as part of the city’s percent for art program administered by the Department of Cultural Affairs.

The Library serves the residents of Los Angeles. With more than six million volumes, it is one of the largest publicly funded library systems in the world. The system is overseen by a Board of Library Commissioners with five members appointed by the mayor of Los Angeles.

If you are a photography buff, the Central Library houses and archives the extensive Los Angeles Public Library Photo Collection of over 3 million historic photographs from varied sources and collection acquisitions. Many images can be viewed by the public via the online photo collection. The physical Photo Collection is an important resource for researchers, writers, curators, and educators. The Photo Collection’s sources have included: the former Los Angeles Herald-Examiner newspaper photo morgue; the Security Pacific Bank Collection; the Los Angeles Chamber of Commerce image archives, Hollywood Citizen News/Valley Times Newspaper Collection, and the ‘Turn of the century Los Angeles’ collection. Collection sources also include the portfolios by noted local and regional photographers, such as: the Ralph Morris Archives of the Los Angeles area from 1939 to the late 1970s; a collection of 1940s L.A. images taken and donated by Ansel Adams and the William Reagh Collection (40,000—800 online) of post-war Los Angeles to 1991.